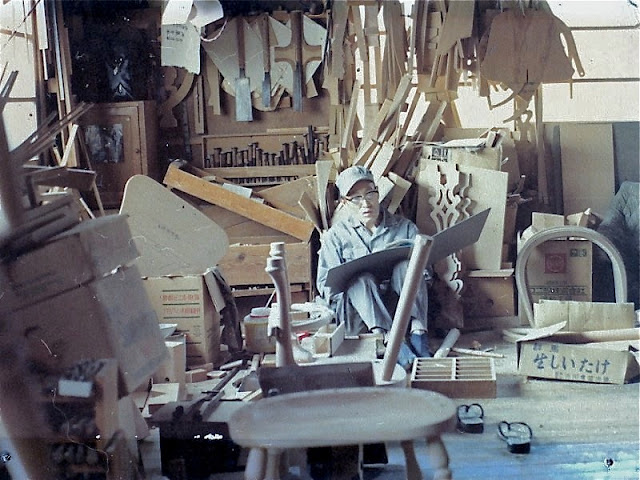 This man was my main teacher during my apprenticeship, a member of the company where I trained.  I sat a little over two meters to his left when working, for four years.  He began his own career at the age of thirteen, in the town of Kobe.  He had vast experience building all different types of furniture, but at some point had become a specialist in chairs, perhaps simply because the shop needed one, furniture of western taste was becoming more and more common.

A transformation would take place every morning when he came into work.  A quiet and simple person of relatively slight build, appearing not dissimilar to any somewhat elderly man that you might pass on the street and not glance at twice, but once he dressed in his gray trousers and shirt that he always wore when at the shop, the sense about him would become one of superior strength and confidence.  He truly exemplified the shokunin, going about the tasks in a relaxed and definite way, and also conveying a powerful if not fearful atmosphere from his long experience and high degree of commitment to his work. The furniture he built was clean, even from left to right, and had an appearance of efficiency to it's making, something that is not so often seen in woodwork, where one can struggle with the details.  He had profound knowledge and skills, the man was a great inspiration for me.

The last day of my apprenticeship, I waited outside the shop to sat goodbye and to offer my thanks.  I thought that it would be good to be alone together for a moment, away from the other craftsmen . He looked at me, somehow in a way that seemed slightly different from before, acknowledged my thank you, and said, "You have to get faster".  Then he turned and walked out the gate. That was it, no sentimentality, or a pat on the back like I might have wished for, simply his final instruction about the work.  All the years that have passed since that took place, the realization remains regarding the wisdom in his parting words, and it is still true, I do have to get faster.

Sometimes I would stop in and see Mr. Nakamichi and his wife on the infrequent visits to Japan some years after.  He had retired after sixty years as a craftsman, his health was not so great.  We would drink tea together, maybe a chat about how things were going for me as a furniture maker, and I might bring out some photos of what I had been doing.

The last time I visited Mr. Nakamichi, he was bed ridden and only semi conscious, a short time before his death.  When I entered his home, his wife said to me, "Go upstairs, you will be surprised to see him making furniture again".  I couldn't understand what she might be saying, because I knew that he was not in a good way.  When I entered his room, I saw that indeed he was at his trade again, in bed with his eyes closed, with his hands going through the motions.  At one point he was holding a dozuki saw and making a fine cut in a piece of wood, his straight cut, it was unmistakable.

Thank you for sharing your experience.

A privilege, and thanks for viewing.

Thanks for posting this. Forgive me but I don't understand what you mean by the comment "The furniture he built was clean, even from left to right", Left to right?

KP,
Sorry about the lack of clarity, it did occur to me before that it perhaps wasn't the best way to describe.

A few different things that the remark gives reference too. For example, with a wooden seated chair, Mr. Nakamichi's seat shaping would have a wonderful orderliness about it, the depths and curves would be very consistent on both the right and left sides, the transitions equal. That would apply to any shaping on furniture that he made, basically. His eye and feel for it was excellent. He knew what he wanted to achieve for both the comfort and visual aspect, and it was difficult to much find differences, say within multiples of the same design.

Another aspect to which my remark applies, and something that for me was quite profound, was evident when observing the completed work of the long experienced craftsmen in the shop, the same designs and specifications built by different men. After awhile there, I could look at a finished piece, and the feel of it would often tell me who made it. Edge treatments, the degree of rounding over or however it was done, is one example that revealed a lot of importance. Craftsmen could use their own tastes and preferences for these small areas, and though the differences might be rather small, the overall feeling from the cumulative effect would be quite telling, and indicative of an individual. I would even go so far as to say that there was also a reflection of the maker's personalities also given in those details.

In terms of pure handwork, it probably isn't something that a lot of people get a chance to observe to make comparisons, and also doesn't seem to much get talked about, but I grew to understand that this manner of working, beyond the overall design of something, does give a conveyance of the man behind the tools, to a subtle level. Mr. Nakamichi's own flavor in his work, expressed a lot of self assurance and consistency (evenness), both spontaneous and relaxed at the same time. It was quite strong and clear.

I think about freshness in woodwork, it is something I hope for. I want to believe that control allows it. Restraint can have much contained within it, including expression. Familiarity seems like a grand thing.

A bit of a long winded answer, but I hope it is helpful.

A beautiful story and experience. Well written and described. What a pleasure that must have been. I can only imagine what you gained from the time spent with such a magnificent fellow.

Thank you, John. It was a meaningful measure of time with the man, of which the things I gained still exist.

I suppose I'm a little late, but this beautiful story moved me deeply, to tears. Thank you for sharing so carefully the grace of this man's life and work & revealing the grace in yours. Inspiring.

Really liked this story... shows the dedication and appreciation he had for the work. Thank you for sharing