Working on a new chair design

I had the basic idea for a new dining chair design, but lots of things need to be worked out to finalize the concept before making anything that I would want someone to use.  First I made a chair out of black and red painted cardboard to work out some basic proportions.  I could sit in it to see how I liked the size.

Next I have made a prototype out of some Pine and upholstery materials, further developing some design details and enabling me to much better see how I like the seating comfort aspect as a dining chair.

I still need to make some design changes, particularly the front legs which seem rather stiff to me, but overall I am pleased with how the chair is turning out.  The seating is quite comfortable, upright enough for dining, but also relaxing.  I feel pretty confident at this stage to go on and make a chair that I can exhibit and hopefully someone will decide that they want to own and use it.  I hope to show a final chair in a later photo. 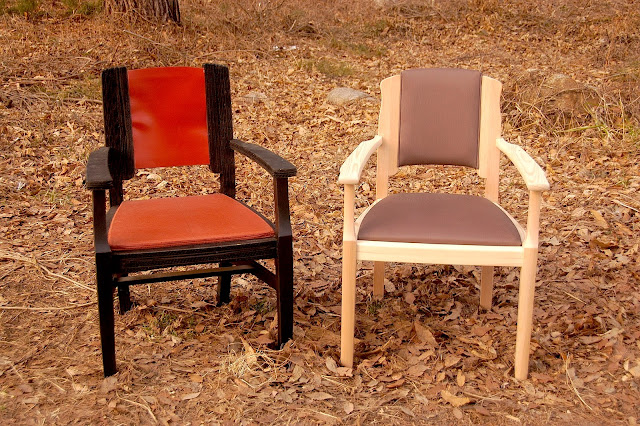 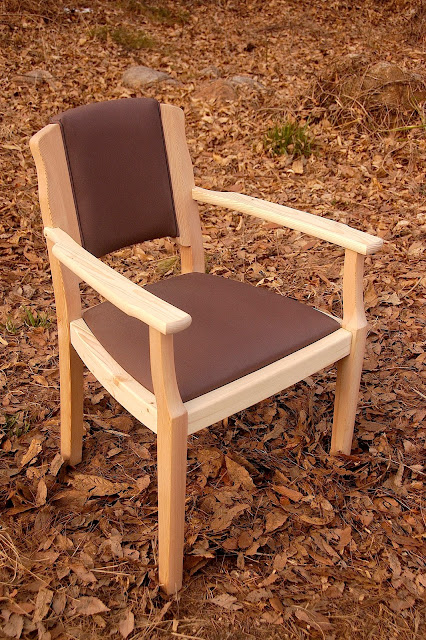 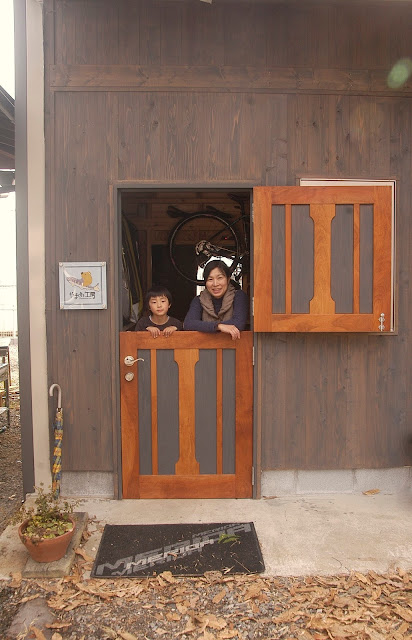 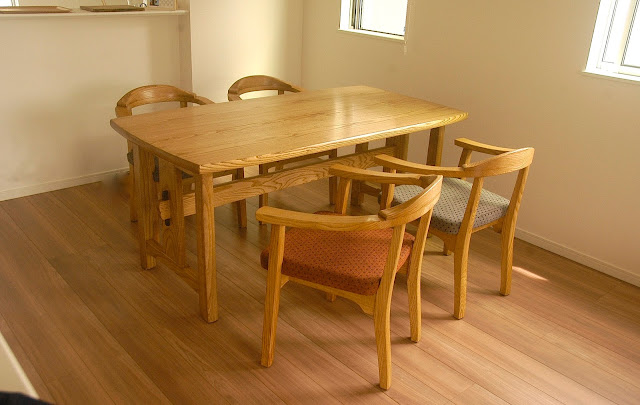 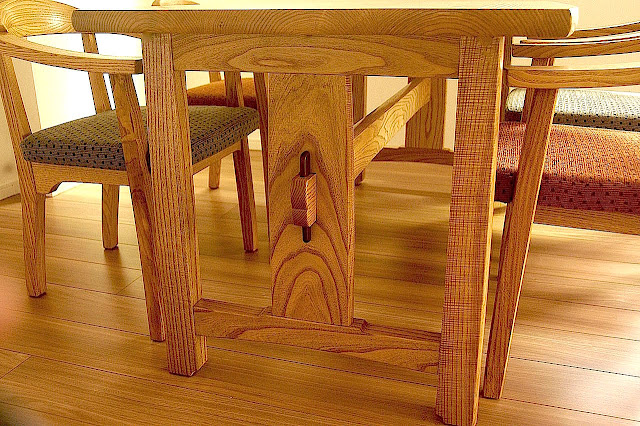 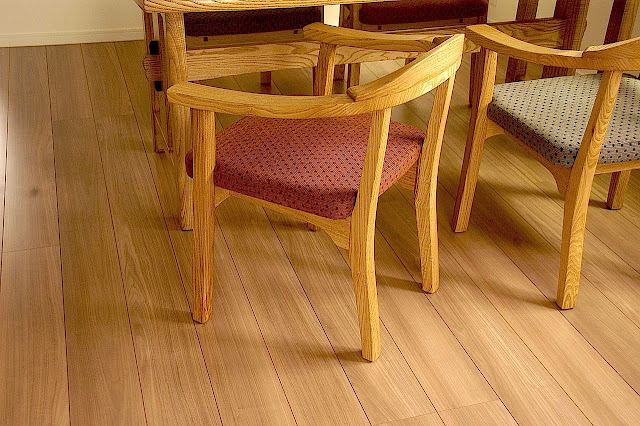 Some recent woodwork from last year

BUTSUDAN MADE FOR CLOSE FRIENDS

I hope to write about my good friend, Masanori Minami, and of my relationship with him.  He was an artist, a well known painter in the traditional Nihonga style, even though he lost both of his arms at the shoulders when a boy.  Becoming a mouth painter, initially by way of training with a Buddhist nun that had also lost her arms, his story beyond that point of having suffered a devastating injury, is one of perseverance, strength, and fine achievement.

Over the last number of years, Masanori was in poor health, and contemplating that his time remaining was likely short, he asked me to design and construct the butsudan for his home.  Beyond acknowledging the request, I barely considered the project at the time, he was too dear to me to much want to consider his death, but as it turned out, his life came to an end sooner than was expected, and my friend's wife confirmed that she wanted me to build the altar for them.  Her desire was to have the butsudan incorporated with stained glass, accented by a light inside, and overall of a relatively uncomplicated design.

It was a challenging project for me, both figuring out what I wanted to do for appropriateness, along with the technical requirements. The four softly curving glass panels in the front and rear needed to be removable in the event of damage.  Japan has frequent earthquakes, so over years of use, damage occurring is an unfortunate possibility.

I had a quantity of both Claro and Black Walnut that I had been keeping for many years, some beautiful representation of both woods in the deep color and grain pattern that can make this material so wonderful for woodwork .  I had been saving the wood for what I hoped would at some point be a special and worthy use.  I am deeply saddened by the loss of my good friend, certainly among the individuals that I have met during my life that I have found to be both greatly enjoyable and also inspirational.  He was a man that was loved by many, and it is my hope that the butsudan will contribute to his memory in a supportive way.

Clicking on the photos increase the size, and thanks for viewing my blog. 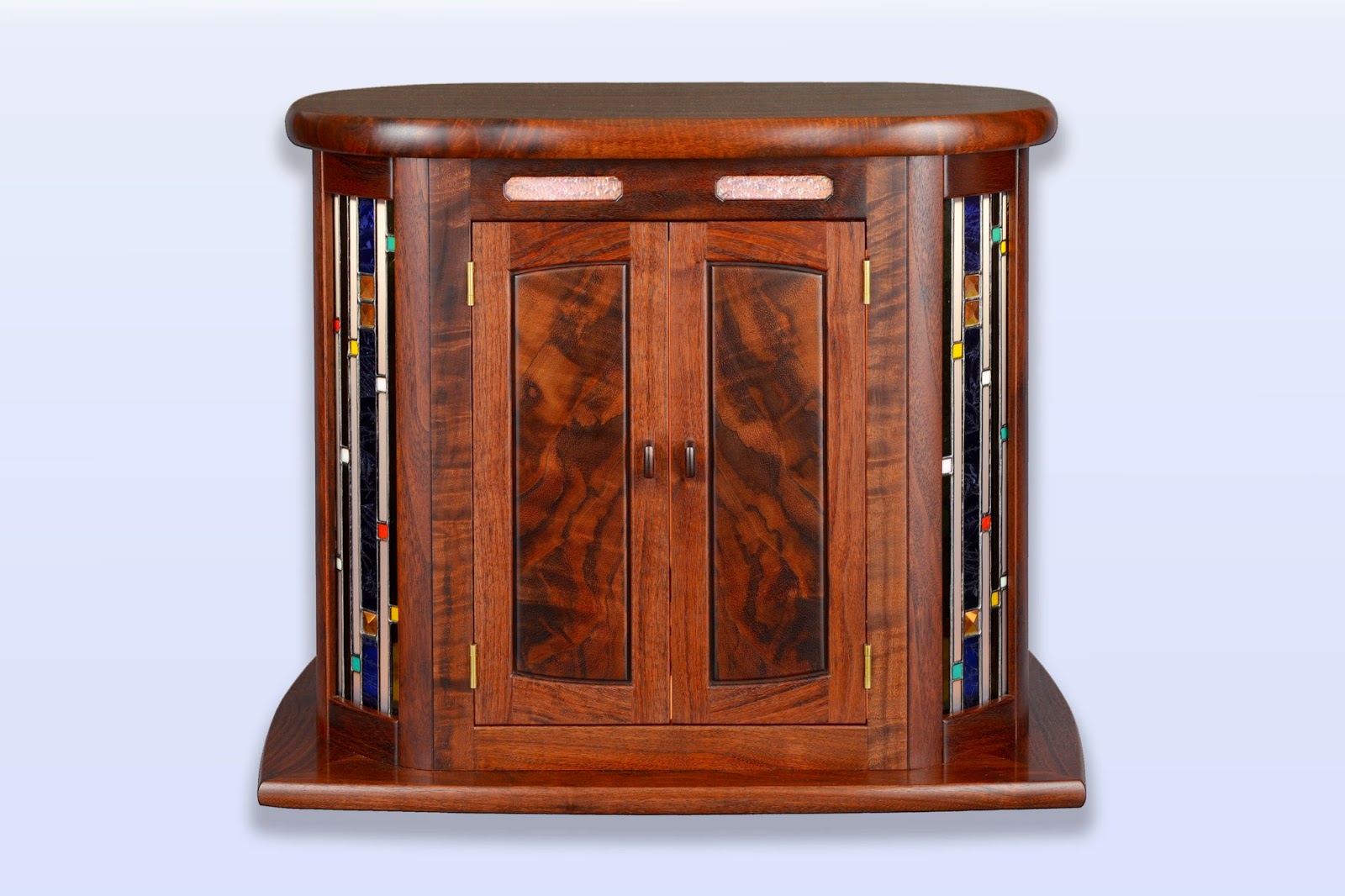 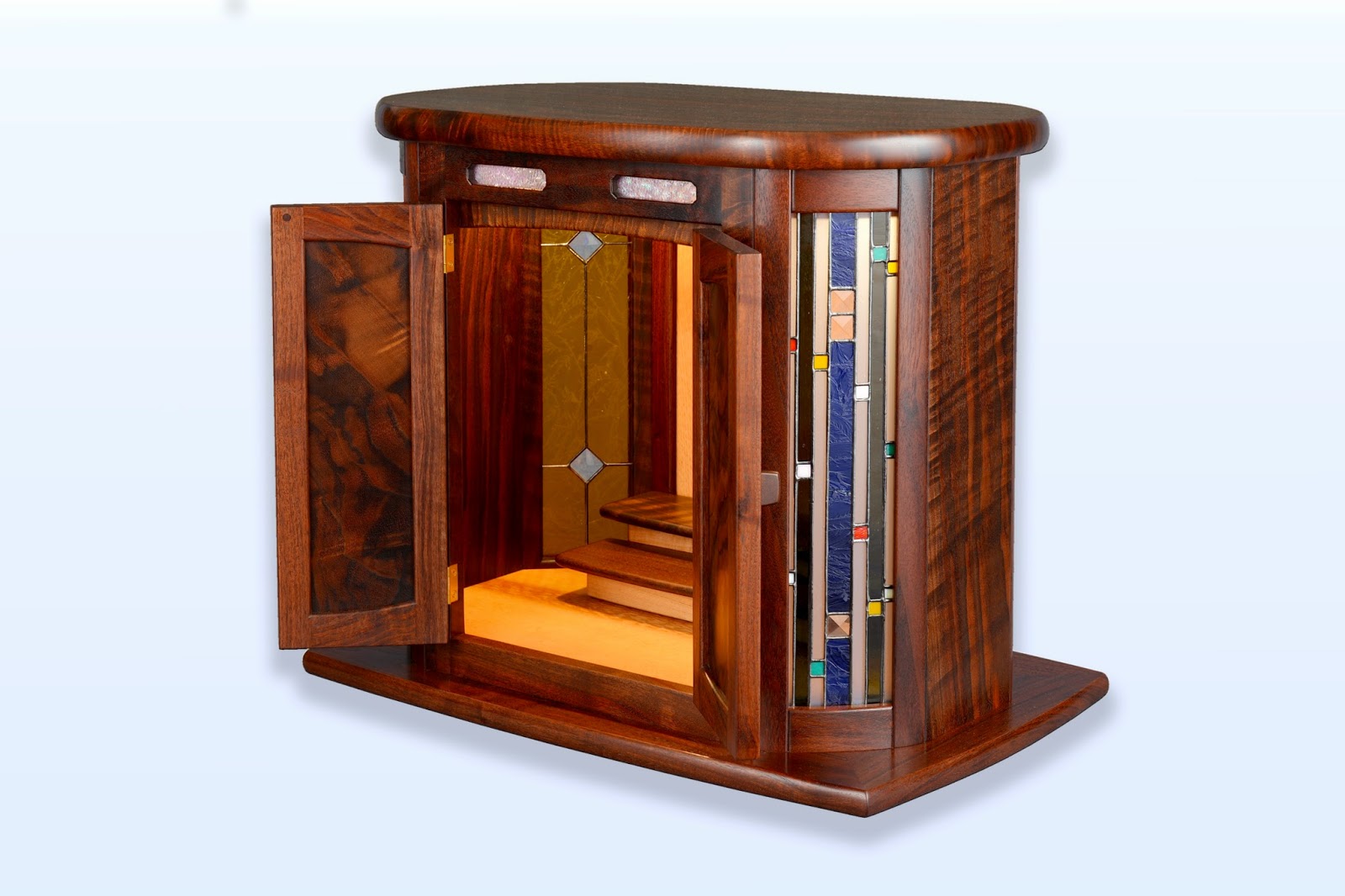 A lady and her friend each wanted a small simple cabinet with an open space at the top, and some other specifics about drawers and a door with the space behind.  I used some very nice Black Cherry that I was fortunate to find.  Not a complicated cabinet, but I did have some considerations integrating the allowable movement solid wood construction with the design requirements.  The area of the country in which the cabinets will be used, is considerably damper during certain times of the year, compared to where I live and work.

Of the many types of hardwoods that I normally build furniture out of, I would say that Cherry is one of the more predictable ones to work with.

Delivering the work enabled a rare trip down to Shikoku in southern Japan, a place that has some amazing feats of engineering highway bridges. 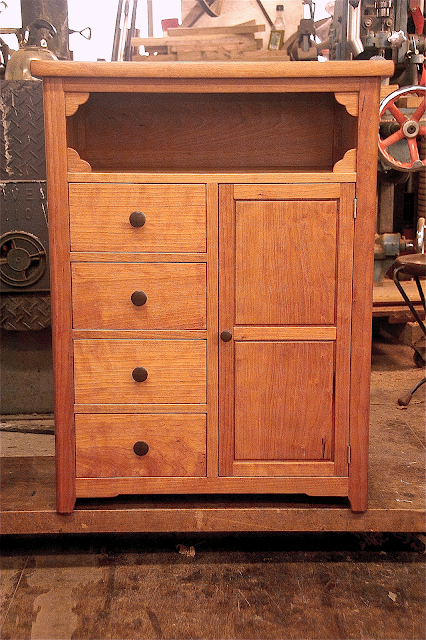 Mr. Natural and the Evolution of a Design 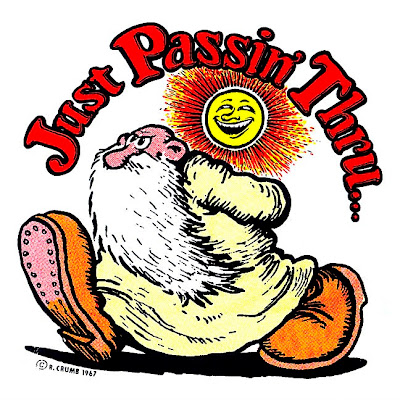 The artist, R. Crumb, his well known character, "Mr. Natural", was the initial inspiration for the design of a rocking chair that I built a few years ago.  I like how the depictions of the flowing bearded man often show him stepping out with purpose, and he seems in good balance and unfettered as he plows through his path in life.  If one reads the stories that accompanied the character, it is shown that people relied upon him for his clear pronouncements, yet there is also something a bit quizzical about the man, one should often expect the unexpected.  His shape of stability and assuredness in motion is what I also wanted embodied in the chair, along with the quality of being something unique, but with limited need for deliberation when viewed, the appearance being fundamentally solid and self explanatory.  If the curves are graceful as an accompaniment, then I would be thankful.  I desired a chair meant to be a rocker in total purpose from the beginning, not something that evolved to that from a previous history of being solely a stationary chair on four legs or other, such that often confuses me with the mixed messages of both rigidity and motion at the same time. 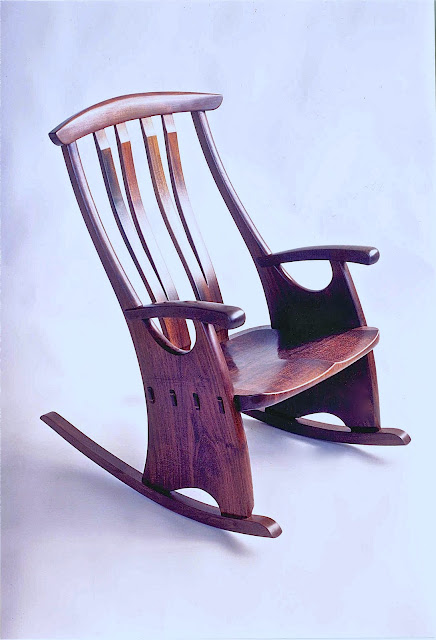 I liked the first edition of Mr. Natural out of some very rich Walnut, and so did a few clients of mine, but it was a bit experimental and eventually encountered some technical problems.  Perhaps those that also work with wood can pretty easily figure out what those were?  I wasn't oblivious to the possibility of a degree of failure resulting, but the form was compelling to me, and in the least wanted to test it out.  Following the advice of another R. Crumb character to, "Keep on truckin'", I thought the basic concept was worth pursuing, and went on to the next chair edition, also in Walnut, with one major change that I thought would alleviate the problem that arose in the previous design, along with a few smaller proportional ones. This model, seen below, also found a good reception, and I have made a number of them for people.   It further fulfilled my hope that a comfortable chair would likely reduce much in the way of hesitation from purchasing a somewhat expensive object gleaned from a certain comic book character, were one astute enough to notice the resemblance.  Crumb's Mr. Natural is a man of wit, intrigue, and charm, but sometimes his associations can be of a somewhat dubious nature.  Perhaps it is somewhat like the Buddha himself, who after achieving enlightenment, is said to have preferred the company of hell raisers and drunkards, over the more restrained type folk that seem more commonly met.... 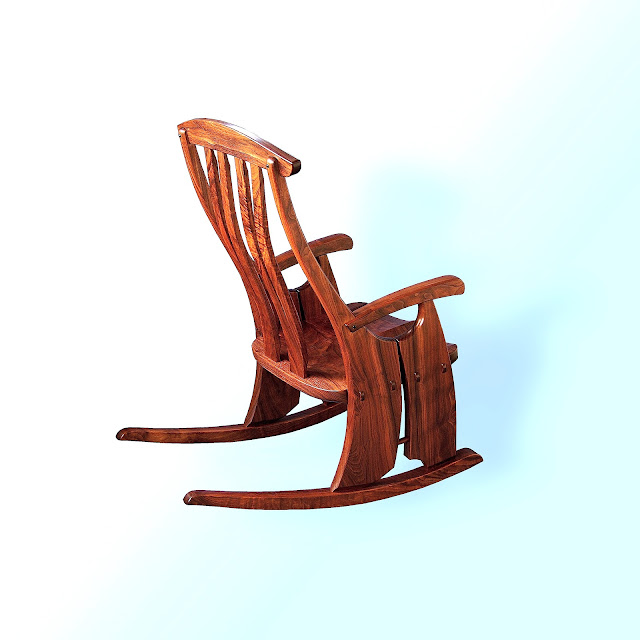 For a few years I went with the second design in the series, but responding to the
comment that my furniture sometimes tends to be a bit heavy, I thought less about the original inspiration and proceeded to refine the design to a lighter in visual weight chair. Most recently produced from some Cherry that I had stored for many years, and originally rescued from pulverization at a pulp mill, the results are shown below.  I was pretty happy with the way things turned out, and so is the dear woman from the next town over that commissioned me to make her a rocker of my own choosing, and now owns the chair.  Her most recent comment that when sitting down in the chair, she simply does not feel like getting up, pleases me to no end.  Success is sweet with new designs. 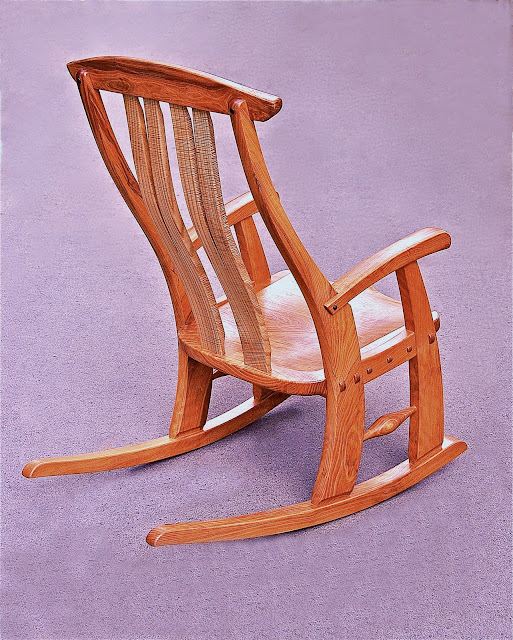 Still, wanting to see if I could take the chair to a further lighter weight, the results are shown below, the latest in the series  Particularly the front and rear legs are a lighter scale, as are the remaining parts of the chair to a smaller degree.  It was only a couple of days ago that I delivered the finished chair to it's owner, commissioned for her as a total surprise, an unexpected gift from a generous friend.  The wood is my local Chestnut, a material that I have come to much value and favor in recent work.  The recipient  of the rocking chair is a member of a large household comprised of three generations, from grandmother to still young grandchildren, so I expect the chair will get much use, and henceforth, remembrances will accompany it through the ages.  It all seems quite natural. 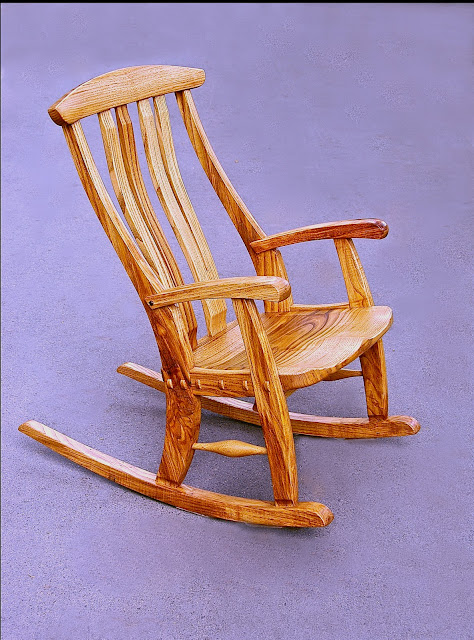 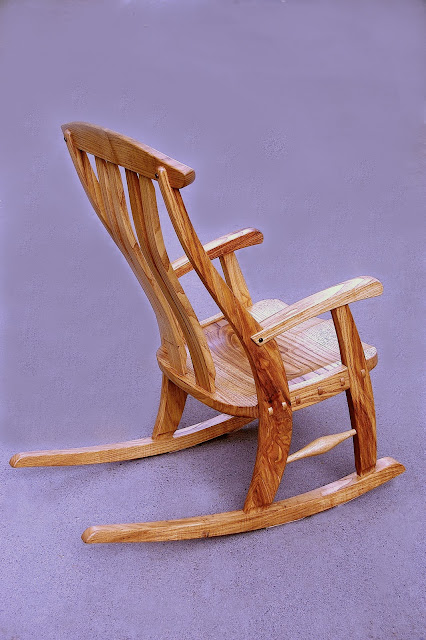 Thanks for viewing my blog, your comments are welcomed.
Posted by djy at 6:39 AM 25 comments: